A High School Football Team Decided To Take A Knee For The Anthem, So The Refs Taught Them A Lesson 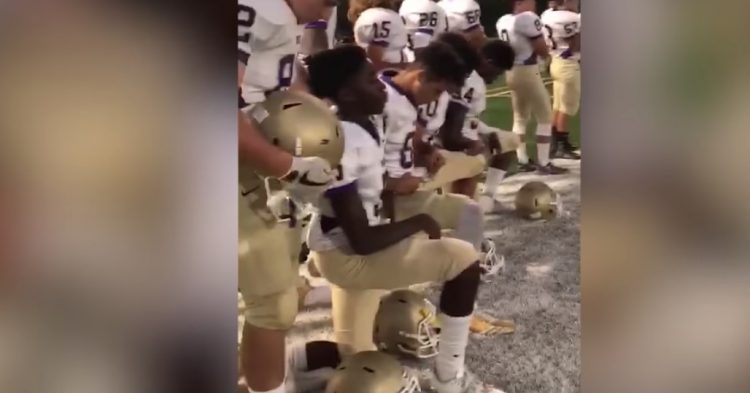 Ever since former NFL quarterback Colin Kaepernick took a knee to protest police brutality and racial injustice, his protest has taken like wildfire. People who support his cause have joined him, kneeling during the national anthem, to raise awareness around the issue. But those who feel patriotic about the flag and who have pride in the United States military are not happy about this form of protest because they feel it is an insult to America.

The football team from Monroe High School decided to take part in Kaepernick’s protest. Many of the players took a knee during the playing of the national anthem before the game. But as soon as the players dropped down during the Star-Spangled Banner, the game’s two referees knew they needed to participate in their own form of protest. According to them, they were unwilling to sit by and watch the high schoolers disrespect America like that. So they walked off the field and quit.

New Jersey football officials left the field when they watched players take a knee during the pregame ceremony. The referees to stage the counter-protest were 54-year-old Ernie Lunardelli and 27-year-old Anthony Lunardelli.

Ernie was outraged to watch teens taking a knee in protest during the anthem.

“I’m not in favor of anyone disrespecting our country, our flag, the armed forces,” Ernie said, according to //NJ.com . “What they’re protesting has nothing to do with the national anthem, and I’m against it, so I decided to protest for them kneeling, and that’s what I did.”

“Whoever is disrespecting that flag and the national anthem, that’s who I have a problem with. That’s my protest. I don’t care if it’s a baby if it’s an 80-year-old man, anybody. I don’t care. Any race, color, I don’t care who it is. It’s not the way I was brought up, and it pisses me off that people are doing that.”

Ernie had an inkling that the high school football players would kneel during the game. That’s why he warned the league’s commissions that he would quit if any of the players knelt during a game he officiated. So when the students took a knee, Ernie and his son walked off the field just like they promised they would.

After the Lunardellis walked off the field, they were replaced with two cadets on the chain crew. Ernie does not think the game was official because of that.

“That game should not count now because they did not have the right personnel on the field,” he said. “These kids weren’t officially carded and trained, so they’re putting the kids in jeopardy. I’m not.”

Ernie already has his lawyer on hand to fight the game.

“I have a lawyer already set up because they’re not going to run me out of town,” Ernie said.