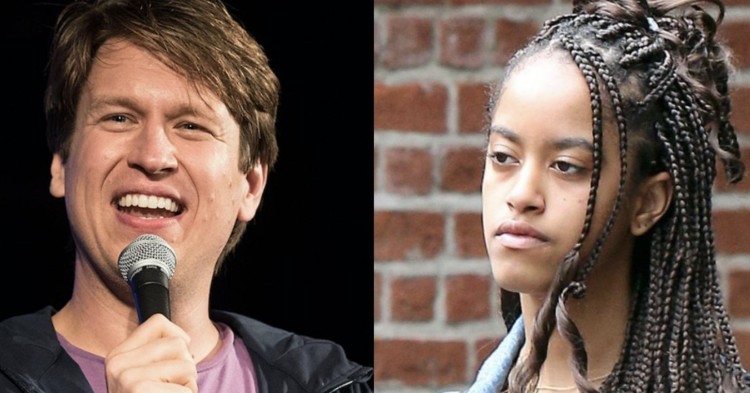 While delivering a standup comedy performance in Massachusetts, the New York City-based performer Pete Holmes noticed that two people were “disrespecting” him while he was on stage. One of those two people just so happened to be the former first daughter Malia Obama, so Holmes told her to “shut the f*** up” and kept it moving. Now, Holmes has spoken out about his undesirable encounter with Obama during an appearance on “Conan,” in which he explains what Obama and her friend did at the Comedy Studio in Somerville, Massachusetts, which is not far from Harvard University, where Malia is currently a student.

“I was doing standup, and I was watching the show before I went on, I was going on last, and there were these two hot women, young women, in the front, that the whole show were whispering,” Holmes said. “It’s worse than heckling. What a Black Mirror nightmare to be doing standup, and there are two attractive girls – which is what made every nerd into a comedian – in the front row whispering and laughing at people on the stage, but in a bad way.”

Holmes did not realize it at the time, but one of the two whispering women was the daughter of former President Barack Obama. IF he had known it was Malia, he might not have confronted her with as much gusto as he did because he would have been worried about upsetting the Secret Service guards that were likely keeping lookout.

Instead of respecting the comedian’s wishes, Malia and her friend ignored him and continued their side conversation in whispers. Because they were not going to listen to him while he was “acting nice,” he decided to get a little gruffer in his delivery.

Holmes knew he had raked the two women through the coals, but he wasn’t done yet. He decided to toss the curtain onto the pair because he thought the whole audience would erupt into laughter at his harmless prank.

“And I go, ′I don’t care. Enjoy the show however you want. I just don’t want to see you,’ and I cover them with the curtain,” Holmes told Conan. “I thought this would get a big laugh. Nothing. The whole audience turns on me.”

Holmes didn’t know why the audience was on the women’s side until after his performance when he learned that he’d just pranked the eldest daughter of Barack Obama.

“After the show, I find out it was Obama’s daughter. It was Malia! And her hot friend!” he said. “She looked great. Terrible comedy audience. That’s a true story.”