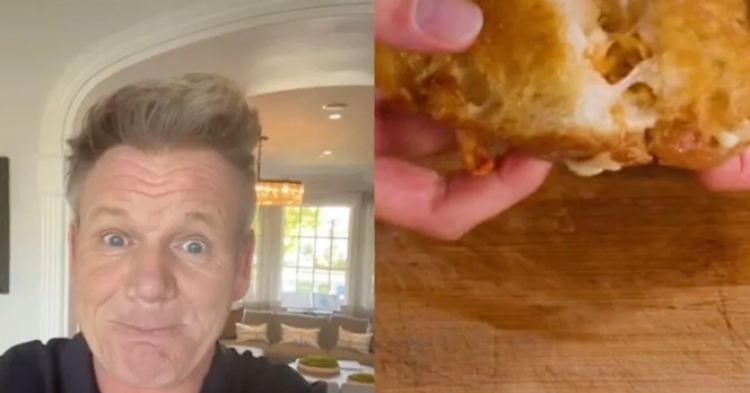 Gordon Ramsay has made a name for himself by verbally lacerating the “victims” on his cooking shows for their shortcomings. However, the celebrity chef may have found his match. Although Ramsay owns and operates many successful and world-renowned restaurants, he shared a grilled cheese recipe in 2020 that was not as tasty as the chef might have desired. In a recent TikTok video, user DishEdit shared a scathing review of Ramsay’s grilled cheese, which included thick slices of bread, Asiago and Romano (“neither of which are known for melting”), slathered with a potent kimchi topping – all of which resulted in a sandwich that failed to have good cheese pull.

Throughout Ramsay’s video, he responds to the critic’s complaints in real-time. His reactions are hilarious and done in good humor. He’s willing to laugh at himself and explain why he didn’t make a very good grilled cheese sandwich.

“I was in Tasmania; they don’t have grills in Tasmania,” the celebrity chef joked. He also responded to her tips on grating the hard cheeses and using thinner sliced bread for the sandwich.

The video ends with Ramsay, who previously had a bad experience with kimchi, eating the sandwich and smiling.

“I loved it; I thought it was really good!” he said to DishEdit. “Some people like you think it’s too spicy, but other people like me love spices – what can we do? We can’t all be the same. Some of us are spice lovers.”

Ramsay had a blast making this video and proved that even successful chefs could admit their mistakes.

The grilled cheese recipe was part of the chef’s series Ramsay Around the World. In this particular segment, he was in Tasmania, which is an island off the coast of Australia. The celebrity chef uploaded the recipe for his Tasmanian grilled cheese sandwich to YouTube, where he has amassed a following of more than 18.3 million subscribers. The recipe has attracted more than three million views in the fifteen months, or so it has been on the Google-owned platform and has received 57,000 likes with 35,000 dislikes.

The description reads: “While in Australia, Gordon visited the most amazing cheesemaker in Tasmania who’s making cheese illegally in his home! After tasting the local cheeses, Gordon decided to whip up his take on the classic grilled cheese sandwich complete with homemade kimchi. No one will call you an idiot sandwich after making this!”

“If someone served this to him, he would literally end their career.”

“I love how we all are grilled cheese experts because it’s the cheapest and easiest meal we have all made.”

“Gordon managed to burn the bread and somehow not melt the cheese. Truly a talented chef.”

“Gordon doesn’t understand what ‘Simple’ means. Kimchi in a Grilled Cheese sandwich? Where the cheese isn’t even grilled? And the bread is burnt? I just can’t.”

“As a Swiss person, I can confirm his cheese license has been officially revoked.”

Ramsay’s reaction video is hilarious. Watch it below from his TikTok channel.