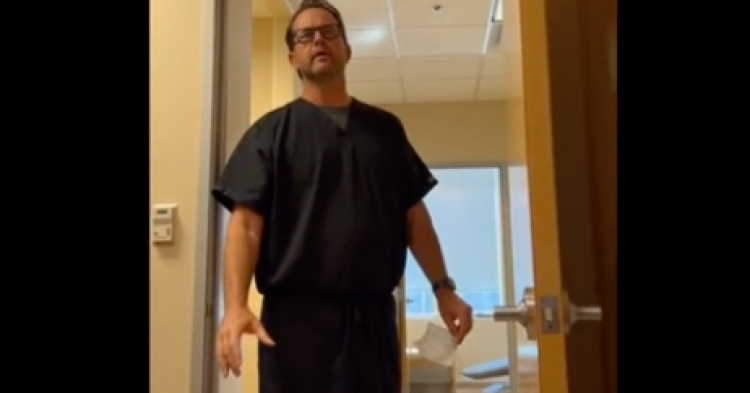 A pediatric dentist insisted that he work with a young boy without having his mother present. While the dentist was filling one of the child’s teeth, the mom could hear her son screaming out in pain and suffering throughout the procedure. She wrote, “Heard a loud cry while my son was getting a tooth filled. Staff didn’t’ tell me what happened after asking multiple times – this was the next day after asking again what happened and what we can do to avoid permanent scarring.”

In the video, which the mom shared on TikTok and later uploaded for people on Reddit, she confronts the dentist about the mark on her son’s face. The dentist claims it was just the mouthguard that they had used while filling the boy’s tooth and that it must have caught his cheek during the procedure.

“I don’t know what you want me to do about it,” the dentist says in the video. “It should heal perfectly with no scar.”

Mom refuses to let the dentist off easily. He apologizes for the mistake and then asks, “What do you want me to do?”

While her son was in the dentist’s chair the day before, mom heard her son cry out in pain when the device clipped his mouth.

“I can’t do anything about it,” the dentist said in the video. “It’s done.”

Mom insists that the doctor write up an incident report, which he encourages her to do instead.

Mom continues to confront the dentist, although he claims he had nothing to do with her son’s injury and that she should just come back in a few weeks when the mark would hopefully have gone away.

Dozens of people shared their thoughts about the incident on Reddit, including one dentist.

“I’m an oral surgeon, previously a dentist. I don’t know why some dentists insist on seeing children alone without their parents. As a general dentist, I always wanted at least one parent in the room with their child to observe me and give them the opportunity to ask questions. I also liked to explain what I was doing as I worked. It made things more comfortable for everyone!”

Another person added, “My mom is a dentist and likes to say what she’s doing now or next while working. She gets lots of praise for it, especially from patients with childhood trauma and dentistphobia. Turns out if you calmly explain what you’re doing and why, be transparent and open, rational but anxious people relax a lot more and are less likely to neglect to schedule the next checkup.”

“I have severe dentist-related PTSD and now cannot get any dental work done without being sedated. I remember that dentists would strap me down or be mean to me or belittle me when I was a child to try and get me to behave… they’d do anything but get my mother, which is all I’d ever be screaming for.”

What do you think about this dentist’s behavior?