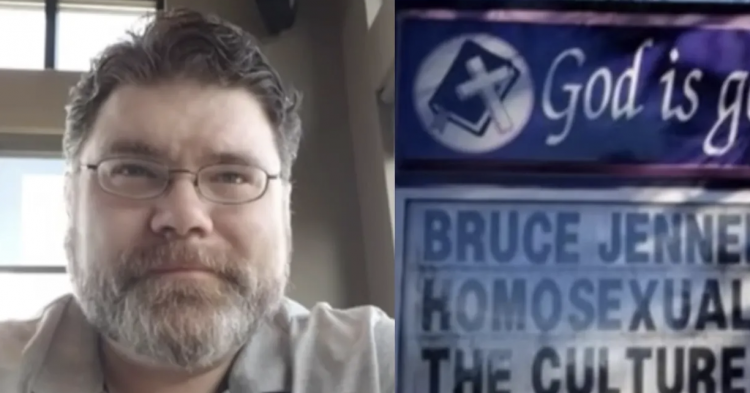 Pastor Justin Hoke will no longer be preaching the Good Word at the Trinity Bible Presbyterian Church in Weed, California, after he offended his local community with a disgraceful sign. The pastor was trying to preach his anti-LGBTQ beliefs to the community, but his method of delivering the message – the church placard – was met with much disapproval from people across Weed, California, and elsewhere once an image of the sign went viral on social media.

The pastor’s sign said: “Bruce Jenner is still a man. Homosexuality is still a sin. The culture may change. The Bible does not.” 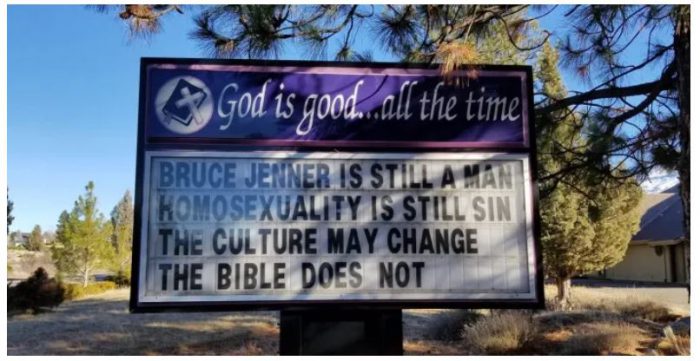 The local community gathered to protest the sign on January 6, two years before Trump supporters attacked the United States Capitol Building. An organizer of the protest against the pastor’s sign was Amelia Mallory, who is a local resident. The protest was named the “Shastina Love Rally” and was open to anyone who wanted to come out in support of the LGBTQ community.

A second protest was organized for the following Sunday. Dozens of people planned to attend, according to an event page on Facebook, while hundreds more express their interest in supporting the cause.

The protest was organized as part of the Love Rally Facebook page. Mallory stated: “We are there to support the LGBTQ+ community in a positive way. Debating with any church members isn’t the goal. We are not there for them. Some of us on our side of the street still are also religious. All of us are capable of treating everyone with respect, even if we disagree. Do not engage anyone trying to escalate the situation to violence.”

Meanwhile, Pastor Hoke defended his sign amid all the controversy – but has since lost his power in the church after he was forced to resign.

“We believe that Jesus commands all Christians to let their light shine,” the disgraced pastor said according to Yahoo Lifestyle. “We also believe that salvation is only for sinners. Jesus said he came to call sinners, not the righteous. If we give in to cultural demands to stop calling sin’ sin,’ then we are robbing people of the opportunity to hear the truth.”

However, Hoke found himself on an island by himself. Even his own church showed no sign of remorse after announcing Hoke’s resignation on Facebook.

“As of today, I am no longer the pastor of Trinity Bible Presbyterian Church. After much prayer and counsel, I have decided that it is best to briefly communicate what has taken place. 1. I was informed by our other elder that he felt he could no longer follow my lead as Pastor of TBPC. 2. I was informed that essentially all but one couple in membership would leave the church if I continued as pastor of TBPC. 3. Our other elder and the couple felt that those who left would likely return if I would leave. 4. Our other elder was agreeable to stay and assume the pastoral responsibilities. Therefore it was determined that it would be in the best interest of the local body for us (TBPC and the Hoke family) to part ways.”