She Wanted To Take A Photo With A Baby Bison. The Next Minute She Was Tossed Out Of Her Pants 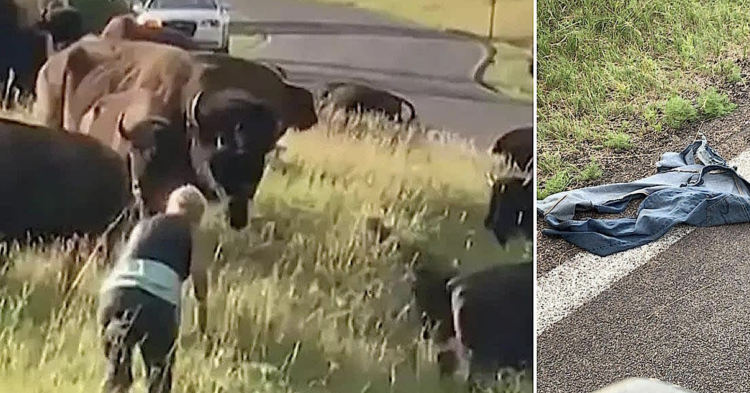 When a group of bikers set out for Sturgis Motorcycle Rally at Custer State Park in South Dakota, they thought they were in for a good time. With few COVID-19 restrictions, bikers were able to gather without social distancing and without wearing masks, although they increased their risk of contracting the deadly virus responsible for COVID-19. One of the people who attended the motorcycle rally was a 54-year-old unnamed woman who came all the way from Iowa for the event.

She was spending some time at Custer State Park and spotted a herd of beautiful bison. There was a small wild bison calf that was part of the group, and the Iowa woman wanted to get close to it for a picture. Although Custer State Park urges visitors to stay away from the wildlife, this woman decided to ignore all the rules and get as close as she could to the baby bison.

The woman quickly learned why Custer State Park urges visitors to stay away from the wildlife. Although the herd of bison happened to stop along the road, they wanted to be left alone. The visitor from Iowa did not care about that and tried to get as close as she could to the baby bison despite common sense urging her to stay away.

It didn’t take long for other bison in the group to notice the approaching woman. That’s when an adult bison, probably the calf’s mother, rushed out of the herd and came charging toward the risk-taking woman.

The bison struck the woman and knocked her to the ground in front of all the other bikers. They watched in awe as she was thrown into the air. The bison attack was so fearsome that the woman was literally knocked out of her pair of jeans. She got her pants knocked off because the bison was intent on teaching her a lesson for getting so close to the baby.

The woman was knocked out of her jeans because the bison’s horn got stuck in her belt. As the woman was flailing around in the air after getting struck by the large animal, her pants came loose, and she was forced to run back to the safety of her group without anything covering her pasty legs.

Inside Edition picked up the footage and ran a report about the bison attack back in August 2020 when the Sturgis Motorcycle Rally was occurring. Thousands of people share comments and reactions to the footage of the woman getting knocked out of her pants.

“Glad the bison is safe,” wrote one concerned viewer.

Most people agreed that what the woman did was not wise.

“Nah, that isn’t bravery. That’s stupidity,” one person wrote about the woman who approached the wild animals.

“Accident? I didn’t see any accident. I just saw a bison doing what bison do. Nothing accidental about it at all.”

“Wrong: fear is for those with brains. This woman clearly has no brains or pants.”

What do you think about this footage from South Dakota?