The Police And Firemen Were All There, But It Was The Pizza Guy Who Ran In And Saved 4 Lives 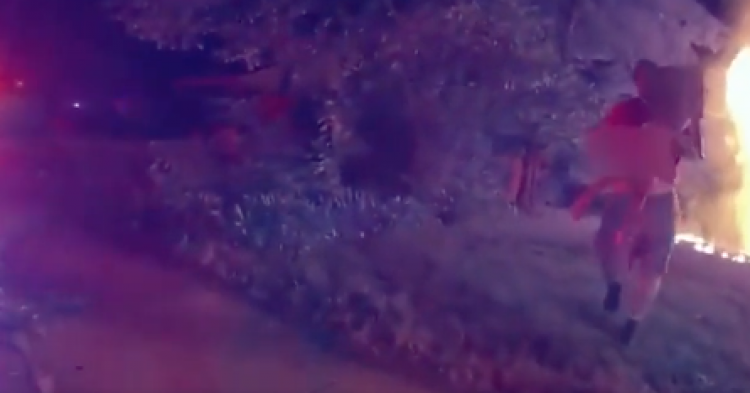 Most people don’t consider pizza delivery drivers to be that important. While they’re essential when it comes to delivering pizza to hungry Americans, they are not as noteworthy as police officers or firefighters. However, one 25-year-old pizza delivery driver proved that he was more than his job title after he arrived at a house that was burning to the ground with innocent children stuck inside.

Police officers who did not want to risk their safety going toward the blaze recorded the moment when the pizza delivery man risked his life and safety to rush into the burning house to save the people stuck inside. The man, whose only job was to hand over a hot pizza to hungry customers, rushed into the burning building and saved four children who were stuck in the dangerous situation.

Although the man was a hero for rescuing the four children stuck inside, someone told him that there was probably another little one still inside the burning house. The pizza delivery man then did the unthinkable. He went back into the blazing house and resisted the flames and smoke to save the little girl left behind.

The pizza delivery man exits the house but is not in very good condition. The fire did a number on his health, so a medic rushed over to assist him in his recovery. They strap a monitor on his arm and begin the process of checking his vitals to make sure the man will not succumb to smoke inhalation or the heat he endured during the rescue.

While the man is recovering from the injuries he sustained during the rescue, he only wants to know one thing “is the baby okay? Please tell me the baby is okay?” The man is a hero for risking his life and safety to rescue the child who was stuck inside the burning home.

The video was posted to Reddit, where it promptly became a viral sensation. Thousands of people shared comments about the rescue, including the following:

“This is the bit that made my eyes well up. The guy was obviously exhausted and in pain, and all he cared about was the kid. What a legend.”

“As he’s getting a tourniquet put on him to stop the bleeding!”

“For real. After all that, exhausted and no doubt in pain, all he was worried about was the well-being of that child. This man is the genuine article right here.”

In an interview after the drama cooled off, the pizza delivery hero said, “Everyone says, hero-this or hero-that, I don’t know about that. I was just a guy.”