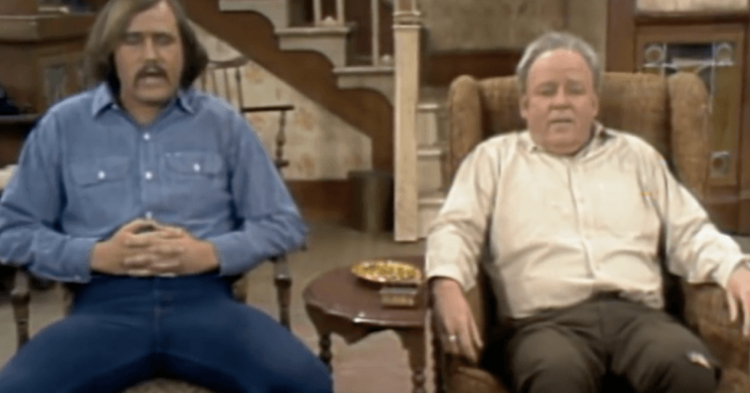 Archie Bunker most certainly was a memorable television character. For years, he appeared as a star of “All in the Family” and struck a chord with millions of Americans who felt they could relate to Bunker’s views on being an American. The show described Bunker as a hard-working American man who previously served in the armed forces, which explains why he was unwilling to stand by and let another man belittle the Star-Spangled Banner and be disrespectful toward it and all it stood for.

Bunker loved being patriotic and never worried about his political incorrectness. Although some of his comments have not aged well considering the “woke” revolution overtaking America these days, Bunker’s stance in favor of the national anthem continues to speak to millions of Americans who continue to put their pride in America before all else.

During this clip, Bunker was watching television with his son-in-law, Meathead. While the national anthem was being played ahead of a sports event, Meathead complained about the anthem and said that it was not a very good song because it glorified the horrors of war.

Although modern-day critics of the national anthem claim it is racist against Black, brown, and indigenous people of color, Meathead was taking a stance against the anthem because it was written during the War of 1812 between the fledgling United States of America and Great Britain.

While Meathead shared his criticism of the anthem, Archie Bunker quickly came to its defense.

“That is one terrible song,” Meathead complains to his father-in-law. Bunker cannot believe his ears and lets his son-in-law know as much. He turns his gaze to Meathead with his eyes popping out of his head in shock at what he just heard come out of his son-in-law’s mouth.

“Don’t start up nothing with me, Meathead. I’m watching the game. That’s a beautiful song, and shut your face.”

Bunker’s blunt attack gets Meathead riled up. He shifts in his chair and prepares to counter Bunker’s statement with one of his own invention.

“Huh? The song glorifies war, and even as a song, it stinks. Nobody can remember the words.”

“You’re going to ruin this game for me?” Bunker lashed back.

“Can you remember the words?”

“Certainly I can!” Bunker shouts.

Meathead then challenges the patriotic Archie Bunker to sing the first few lines of the national anthem. What happens next will have you rolling on the floor with laughter. Meathead doubles down and refuses to put the game back on until Bunker recites the words of the anthem.

Although he recites his lines with gusto, Meathead is the one who gets the pleasure of telling Bunker he is “wrong!”

Dozens of people commented on this delightfully funny clip from All in the Family on the YouTube video included below.

“When those two argue, Mike is usually in the right about things, but there are two episodes when Archie is correct, and Mike is wrong. One of them is this episode when Mike is disrespecting our National Anthem.”

What is your reaction to this funny clip?