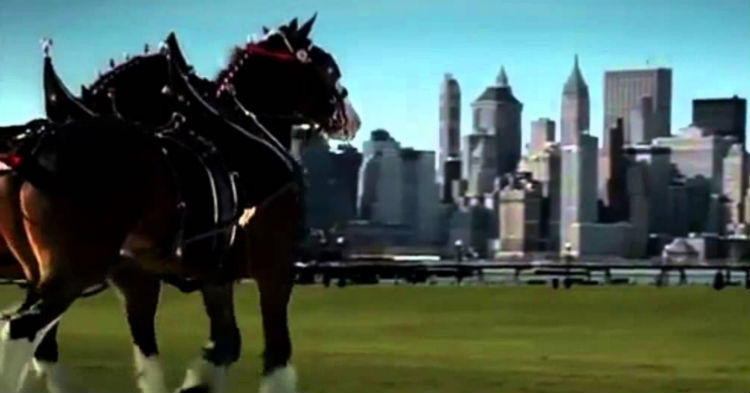 The anniversary of 9/11 is always emotional and makes hearts heavy. This moving ad, which only aired once, will absolutely break your heart. In this Budweiser ad, the signature Clydesdales are featured, honoring the memory of those who died on that horrific day. Horses are seen running in a field and are fitted with their equipment before pulling a wagon away from a barn. They travel on a road, with the surrounding countryside covered in snow, as people watch the magnificent animals pass by.

The ad then cuts to a city scene, as the horses travel over the Brooklyn Bridge to New York City, stopping with the NYC skyline in the distance.

After a close up of one of the majestic Clydesdale’s faces, the camera pulls away as the Statue of Liberty is seen beyond the animals. The music swells and the horses bow down before the scene fades to black.

The emotional commercial only aired one time during Super Bowl XXXVI on February 3, 2002, but lives forever on the internet and makes a reappearance yearly online on this sad anniversary.

The Anheuser-Busch creative team involved had to get approval from members of Congress, the advertising community, and New York Mayor Rudy Guiliani to make the ad a reality.

Bob Lachky, former executive vice president of Anheuser-Busch Global Creative, explained to Fox 2 Now: “We filmed in New York City. We had a helicopter going over the Brooklyn Bridge. Mayor Giuliani let us into the city — the only film company of any sort right after 9-11. To actually come into air space with our helicopter to film the Clydesdales…the hitch coming into Battery Park and it was amazing…just amazing.”

An updated version of the ad aired on September 11, 2011, on the tenth anniversary of the attacks.

Those who have weighed in with comments on the original commercial on YouTube were understandably moved by the ad, with notes that included:

“They really should air this EVERY 9/11 without editing a single thing!,” “Still brings tears to my eyes,” and “We must NEVER forget! How touching. I’m sitting here crying at my desk right now.”

Others shared their experiences and memories from the attack, with one commenter noting:

“I still can’t get past it. I lost so many friends that terrible day. It stays with me like a sickness…each year come August, it starts to creep into my consciousness…and doesn’t leave until a week after the day. Thank you Budweiser for this moving tribute… Please everyone, take a moment, remember those lost, and those fallen from the FDNY/NYPD who so bravely faced certain death, to try and save others.”

Still another person offered their personal experience of being there when the commercial was filmed, sharing:

“I was there when the final scenes were filmed. Not a dry eye in the bunch of us. Some of us, whom lost friends and/or loved ones were so blown away by the tribute that one gent began having difficulty breathing. He was better after a little O2 and later a Bud light.”